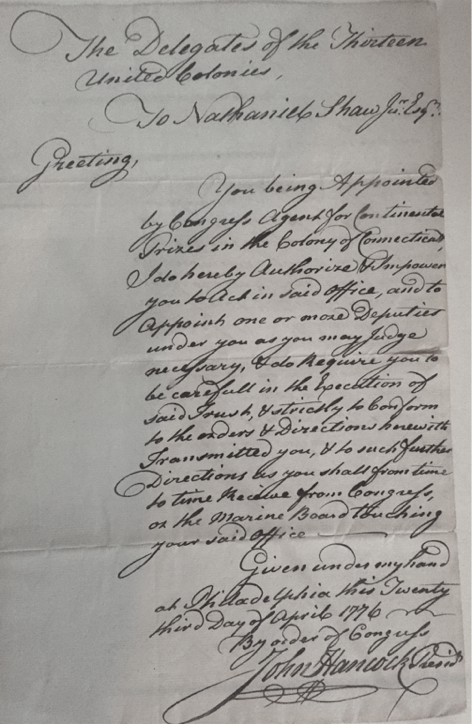 As you enter Shaw Mansion you may see a plaque next to the door stating that the Shaw Mansion served as the U.S. Naval Office during the American Revolution. The meaning of this simple statement is a bit complex.
The Continental Navy was officially established on October 13, 1775. However this did not mean the country would be building ships which flew the a United States flag. Any new navy needs regulations and clear chain of command. The arduous task of composing the regulations fell Congress. Esek Hopkins was appointed to command the Continental Fleet consisting of six ships, a mere fraction of the overall navy of the Revolution. When the Continental Navy needed more ships, they asked governors of various states to loan vessels from the state navies. The he U. S. Naval Office in New London had little to do with the Continental Navy.

On March 23, 1776, Congress approved a maritime act allowing for general reprisal and the use of letters of marque against British vessels. The legislation was the first step to instituting the practice of privateering in the revolutionary war. “Resolved that all Ships &c. belonging to any Inhabitants of Great Britain as aforesaid, which shall be taken by any Vessel of War, fitted out by and at the Expense of any of the United Colonies, shall be deemed forfeited, and divided, after deducting and paying the Wages of Seamen and Mariners as aforesaid, in such manner and proportions as the Assembly or Convention of such Colony shall direct.” British ships were now legally available to privateers as prizes for the taking.

Privateering is often erroneously defined as legalized piracy. However, that definition is quite inaccurate. There are some significant differences between pirates and privateers. Pirates were individuals who chose to leave institutionalized maritime activity to be free of laws and regulations. Their activity at sea was often democratic. They elected their captain and voted on their destination. The captain was only allowed to be in command during battle. That notion is quite different from traditional ships where the captain is the sole authority aboard the vessel. When a ship was taken by pirates, the money associated with that capture was divided by the agreement of the crew. Conversely, privateers had to obey laws, their course was determined by the ship’s captain or owners, captures were determined legal through the courts, and prize money awarded was apportioned using strict guidelines authored by Congress.

On April 3rd 1776 Congress issued the articles under which privateers were to sail. Additionally crew conduct was assured by owners posting a surety pound bond with the naval agents. A letter of marque issued by the naval agent was required by anyone who wished to engage in privateering.
A letter of marque is document which provided protections to the privateer, as it declared the privateer was a military combatant. As such the captured privateer was treated as a prisoner of war. Without the letter of marque, the privateer was subject to piracy laws, thus available to be charged and tried for piracy. Prisoners of war enjoyed rights of decent treatment, available for prisoner exchange, and a guaranteed safe return home after a treaty was signed. Pirates were typically hung.

Naval agents were appointed administer the continental navy in each state, but the larges portion of their job involved organizing the privateering effort. The agent’s job was arduous. They were required to keep all the administrative records of all individuals and ships engaged in the activity. Most colonies had agents, in some instances there were two, in the case of Virginia there were none. In Connecticut, Nathaniel Shaw Jr was appointed the Navy Agent on April 17, 1776. Shaw not only served as the agent for the Continental Congress, he also served as agent for the colony of Connecticut. He became the sole administrator for all warships entering and exiting the port of New London.

After a privateer captured an enemy vessel, the process for receiving prize money was lengthy. The law stated that any captured ship was to be brought to the closest colonial port. Once there the ship was inventoried and written accounts of her capture were collected. The inventories and accounts were then sent a state county court to be reviewed, and the court declared whether the capture was legal. Then the courts awarded prize money. Everyone involved in the capture, crewmen, officers, captain, naval agent, investors, state government, and the Colonial government was allocated a percentage of the money earned from every sale of captured ships.

There are different estimates concerning number of ships taken by privateers and brought into the ports of Connecticut. Several sources record that 500 ships were taken, while others state 600 ships. The confusion for the numbers is two fold. What constituted an official prize coupled with the records destroyed when Arnold burned New London in 1781. The privateering effort of New London, for all of the colonies was significant at least in an economic standpoint. British shipping to the colonies became quite hazardous, and the insurance rates for such voyages rose to be prohibitive. Privateering during the Revolution was quite lucrative. Men motivated by the prospect of a 150% pay increase signed aboard privateers taking advantage of the opportunity to profit. That opportunity was responsible for the largest fleet of American ships sailing during the Revolution.