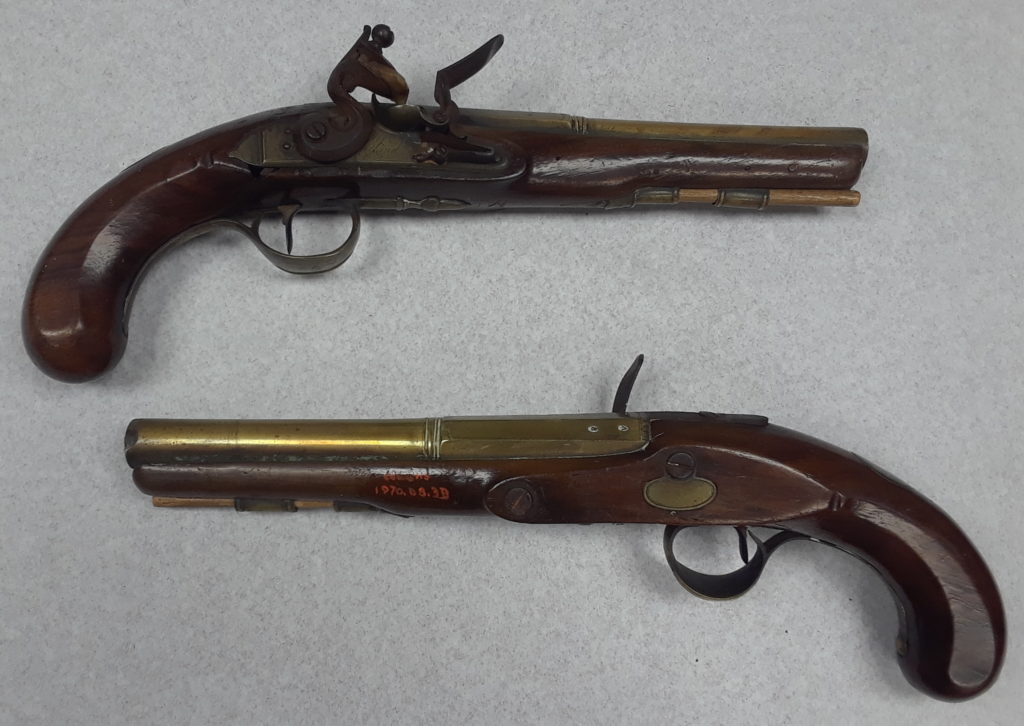 In our collection are a selection of military artifacts owned by Lieutenant Colonel Thomas Wheeler of North Stonington. Thomas was born into the prominent Wheeler family in 1760 and was a cavalry officer in the Connecticut State Militia. He was commissioned as a Lieutenant in the Third Regiment in 1796 and, following subsequent promotions, ended up in command the regiment by 1805. It does not appear that Thomas Wheeler served during wartime, either in the Revolution or the War of 1812.

Thomas Wheeler owned two matching brass, flintlock pistols. They were manufactured by Ketland and Co., a gun maker founded in Birmingham, England. Engravings and proof marks show that the metal fittings were manufactured and certified in London, likely in the 1760s. The handles are made of walnut, although it is unknown whether the wood is American or English, since gun parts were often shipped across the Atlantic to be assembled later in the Colonies.

Both feature half-octagonal brass barrels, a popular feature of many contemporary pistol designs. This was largely decorative, although the flat top would have assisted with sighting and the design would have provided extra reinforcement around the firing chamber. Additionally, an engraving of a rose decorates the bottom of both trigger guards, and just fore of these are two acorn-shaped finials. Both are common features on late 18th-century flintlocks, although any specific meaning of these markings has not been uncovered. Included in the collection are two fitted leather holsters for both firearms.

Thomas Wheeler carved his initials along the bottom of both barrels. However, Thomas was not their only owner, nor their first; both thumb plates are engraved with the initials “WW”. Our provenance notes for these artifacts do not list someone with these initials as an owner, so we must make an educated guess as to who the original owner likely was.

Thomas had a brother named William, who was a soldier in the Revolution. William Wheeler was a private in the 5th Connecticut Line Regiment and he died in service in February of 1778, likely at Valley Forge. However, as a private, it is unlikely that he carried two matched firearms of this craftsmanship.

On the Wheeler side, Thomas did not have any other direct relatives with the initials “WW”, but his mother had been born Martha Williams, of the Stonington Williams family. Thus, Thomas Wheeler had a grandfather, an uncle, and a cousin all named William Williams, and all three are possible owners. The latter is an interesting possibility; Major-General William Williams III was the Connecticut militia officer in command at the Battle of Stonington during the War of 1812. Thomas alternately may have acquired the pistols from another unknown source.

Another item of Lt. Col. Thomas Wheeler’s in our collection is his cavalry saber. The saber lacks any ornamentation or maker’s marks, but this Mameluke-style sword appears to be in the style of the British Pattern 1796 Light Cavalry Sabre, which would have been a fashionable choice for a new cavalry officer in the 1790s. Additionally, a set of Thomas Wheeler’s spurs are in our collection.

One interesting historical note for these artifacts comes from “The Stonington Battle Centennial”. It is mentioned that during the 1914 celebration of the Battle of Stonington, Benjamin Pomeroy Wheeler, Thomas Wheeler’s great-grandson, rode in the parade “carrying [an] old sword and pistols”. B.P. Wheeler left this name on a piece of tape on one of the flintlocks, and the sword mentioned is almost certainly Thomas Wheeler’s saber. This additional connection to the Battle of Stonington is an interesting correlation to the theory that Thomas’ cousin, Maj.-Gen. William Williams, had owned these pistols. Benjamin may have worn these to honor not only Thomas’ service, but also to reflect a family story that was not passed on when these items were donated in 1970.

These artifacts and their beautiful craftsmanship provide a window into the material culture of life and military service in Connecticut’s early statehood, and they draw questions about how family and those who had served were honored. Photo galleries of the two pistols, the saber, the spurs, and four military commissions, each signed by two governors of Connecticut – Oliver Wolcott and Jonathan Trumbull Jr. – can be viewed on the NLCHS website by following the link below.